By now you all have probably come to the conclusion that I'm a cynic or at least a person of limited positive things to say in this business. We'll if the conversation was or is about the OEM's push to tell dealers how to spend money and market ourselves than you're right on the money!

It has been proven to me time and time again that OEM digital, co-opable programs, partnerships (call them what you will) do more damage than good to us digitally-minded dealerships.

Now don't get me wrong. I am an enormous, screaming fan (maybe advocate is a better word) of both Paid Search as Well as Dealer.com. And as far as OEM mandated websites Ford-Direct isn't really on my naughty list (Cobalt certainly is). But this program where Ford is essentially going to Pay Dealer.com to build and manage SEM campaigns that will send traffic to a Ford Direct website has me scratching my head... who the hell comes up with this stuff?

The whole program is laughable. $1,350 mandatory Ford dollars to be spent on keywords myself and the rest of the Ford dealership planet is already (has been for awhile) bidding on! Where's the logic? The amount in general is a joke that money, In the Boston competitive landscape will get you a days worth of clicks before being exhausted...

Seriously! Which is fine (I mean its Ford's money) except all of those clicks are going to send my customers to my red-headed step child of a website's (sorry ford direct) homepage. And Not the very highly targeted vehicle landing page or specials on our Dealer.com site that I would be sending them to had it been my money.

In a presentation of the program today many dealer attendees were asking the same questions I had... Some examples were:

Can we send our SEM traffic to a website other than our Ford Direct site? NO!

I'll admit it I stopped really paying attention after getting the answer to those two questions. I needed to know nothing more for me to accurately deem this program to be our latest OEM PITA.

So my question to you, the resourceful, smart, forward-thinking, refresh crew --what is your take on these sorts of programs? Am I the only one who thinks these programs are a BAD thing?

In the Boston competitive landscape will get you a days worth of clicks before being exhausted...
Click to expand...

So you are saying that you normally spend over $40K/month on paid search?

Where do you get that from? I was exaggerating but still what's your point?

Coming from a "Automotive Internet Consultant" who doesn't have a website I have to ask...

Daniel J. Mondello said:
Where do you get that from? I was exaggerating but still what's your point?

Coming from a "Automotive Internet Consultant" who doesn't have a website I have to ask...
Click to expand...

You said, "I am an enormous, screaming fan (maybe advocate is a better word) of both Paid Search" along with "In the Boston competitive landscape will get you a days worth of clicks before being exhausted... ". By those two statements, you could assume that you might spend this much in a month.

Please look at what I have listed as my company. These days, I might sleep until noon, fish if weather permits, play pool and drink beer in the evenings especially if there is a good band playing. I do like to entertain and I love to cook. Cajun is my specialty. This is a chicken and sausage gumbo from last weekend (I'm sure this is foreign to someone from Boston) but people fight over this: 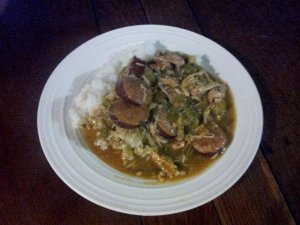 I've always been fond of the ladies. At my age, a long term relationship means breakfast.

I still work on occasion but only enough where I can cover some business expenses like a new fishing boat.

Well you're estimates are off so maybe you fishing is best for everyone. I wasn't trying to get into a lifestyle pissing competition but while we're on the topic my backyard is the ocean so I think I may have picked up a thing or two about leisure sports.

EDIT** I apologize for blowing up at you Doug I just want to stay on topic. I am really interested in hearing some opinions about the pros (if there are any) and cons to the OEM's getting overly involved in the dealerships' marketing efforts.

For the record I also like fishing, cooking, wakeboarding and all that fun stuff... but when I'm on The D-Refresh I'm in the EXPLETIVE Zone

Lighten up young'n. As far as life style, I hoped you might see some humor in what I said.
Last edited: Feb 12, 2014
Reactions: 1 person

Anyway - back on track here.

I had heard similar things about the forced hand on the SEM spend.

So, Daniel, what's your plan of attack or best idea for how to handle it? What's your advice for others?
Reactions: 1 person

I had heard similar things about the forced hand on the SEM spend.

So, Daniel, what's your plan of attack or best idea for how to handle it? What's your advice for others?
Click to expand...

Unfortunately, What's worked for us in the past is to do everything within our power to contest the OEM on these types of actions. Kick and scream until a happy medium is reached with them or they allow us to opt out of the programs.

However with many of the OEM partnerships this is not the case. Often They'll (the OEM) will stuff us fat with useless vendors to work with that do little to nothing to move our performance needle but instead dilute the entire digital market place especially when it comes to PPC SEM dollars and strategies. Our Costs Go up. The Amount of Work goes up. But the result (usually) skews downward.

Dealers have little say in the marketing direction and execution carried out by the OEM(s), but the OEM(s) seem to think it is completely reasonable to push us around - which would be more acceptable if they had any idea what they were doing. Many of these programs leave me questioning their comprehension of digital marketing, technology, and sometimes logic.

There needs to be more buy-in and representation on the dealership side from people who can navigate the digital stratosphere. The dealership personnel polled in these types of decisions should have experience and a proven track record of digital marketing expertise.

Would you hire a contractor to build your house if he/she had never built a house, never held a hammer, and had zero education in construction?

Unfortunately, What's worked for us in the past is to do everything within our power to contest the OEM on these types of actions. Kick and scream until a happy medium is reached with them or they allow us to opt out of the programs.
Click to expand...

From the OEM perspective, they're trying to establish a baseline "No Dealer Left Behind" type of program. I think for those that demonstrate a strong internet marketing program, the OEM's should wave the marketing fee. I think it's something you have to be really loud about - their goals aren't always yours and it is wasted resources and added confusion to the customer (for those with 2 sites Cobalt + Other).

I'm hoping at some point GM wises up and allows a list of approved vendors like other OEMs without penalties. I'd rather shop on Cars when I'm looking for a new Chevy than Google Local Search and hitting the standard issued Cobalt junk!
Reactions: 1 person

There was a time when you could have "Chevrolet" on the side of a trash can with 4 tires and somebody would buy it. Not the case, today. GM needs to worry about building quality and competitive products. I'm not impressed with the "new" Silverado.

Dan, I worked for Nissan about a 100 years ago. They hired me because I had car sales experience (rare), an accounting degree and was a Vietnam vet. Vietnam vets were given minority status and Nissan could hire us instead of blacks. I had been to three regional offices and had never seen a black person.

The manufacturers are fueled by politics and self-interest. As arrogant as some of these factory guys are at your store, they are kissing ass at the zone. Some dealers give these people way too much credit and think they have their best interest at heart.

I was asked to go to a Grand Opening for new dealership in Baton Rouge. This place was huge and opulent. I was walking around the second floor admiring some of the original art work. The Regional Manager asked me what I thought of the new facility. I told him that it was beautiful but said, "how is he going to pay for it?" He said, "who cares?" "If he can't make it work, the next guy will own it for 50 cents on the dollar". "Nissan has a nice facility and where we want it".
There was Adams Toyota down the street and it was brand new and even bigger. They sold out to Robert Levis for the price of the land. He ended up selling it along with two other stores to get from under it. Baton Rouge is the toughest market in the country. At the time, there were four Toyota dealers for a population of 480,000. This Toyota store had 60 service bays! The two largest Chevy dealers were 2 1/2 miles apart on the same side of Florida Boulevard.

Bottom line, if you are selling at or above planning potential, you can do pretty much as you please. If you aren't, you better go along with the program.
Last edited: Feb 16, 2014
Show hidden low quality content
You must log in or register to reply here.
Share:
Facebook Twitter Tumblr Email Link