Losing sucks, especially at the hands of your former employer and cross-town rival. The condolence flowers didn't help either. Jay Carley is determined to not let that happen again.

Van Tuyl came out on on top with an impressive score of over 4,600 points. GM Troy Matthews was happy with the effort and of course the sales numbers. It's well known that when you Own the Phone, you sell more cars. It's also well known that Mr. Matthews and all of Van Tuyl don't like to lose. Ever.

He may have met his match though.

Just 8 miles down the road, Mr. Carley was livid. "I sold more cars than I had ever sold before...and it was the lowest point of my career." As an 18 year employee of Van Tuyl, he learned a few things about competition. He won't let this happen again.

The first ever Car Wars Grudge Match is on: Van Tuyl Midway Nissan and Larry H Miller Toyota Peoria go head to head again starting June 9th. Their phone performance will be held under a microscope. Who can connect more calls to sales people quickly? Request more appointments? Follow up with stalled prospects? Connect more outbound calls? Jerry Thibeau at Phone Ninjas will take their phone skills even further with Phone Ninja call coaching for each.

What's at stake? A ton of PRIDE, enormous sales numbers, and an all expense paid trip to the Caribbean for the Grudge Match's top individual performer.

Make sure to check the out Car Wars Grudge Match homepage for information and updates. Don't forget to vote for which dealership you think will end up on top too! 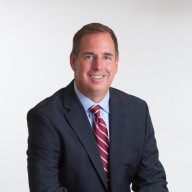 I personally will be coaching and grading the calls for this grudge match! I will be tough but fair and I have no favorites in this match. Looking forward to getting this show started! Look for the coached calls and reports cards here folks, this is going to be a lot of fun!

"He's got a bunch of people working for him that used to work for me, and the reason they don't work for me anymore is because they don't like making phone calls."

Heading into the final day of Car Wars Grudge Match it's a dead heat with Van Tuyl's Midway Nissan holding a narrow lead over Larry H. Miller's Peoria Toyota. What has this week been like? Both stores have set Car Wars scoring records going over 12,000 points with a day remaining. Both have set store records for appointments booked. The stores have been flooded all week and they should set a units sold record too. No big deal.

Maybe there is something too this whole "focus on the phone" Mike Haeg keeps preaching about.

Alright folks, a final wrap up about the Car Wars Grudge Match.

We thought Troy Matthews and Jay Carley would blow it up but never expected the output and performance from these two stores on the phone. It was frighteningly incredible.

Congratulations to the folks at Larry H Miller Toyota Peoria for defeating VT Midway Nissan. The final score was 15,257 - 14,708.

* They requested 1,198 appointments over the phone.

* They set 743 appointments over the phone.

* They followed up on 210 soft appointments to try and convert to a set date / time. 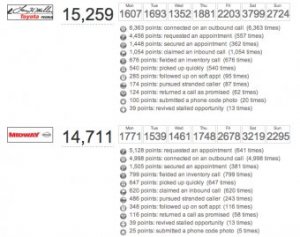 A special congratulations is owed to Cody Smith with Midway Nissan. His performance not only won him a trip to the Caribbean but helped tear it up in sales. Cody requested 117 appointments, secured 75, and connected on 147 outbound calls. He told us he was fighting to win the trip for him and his son. Just awesome. 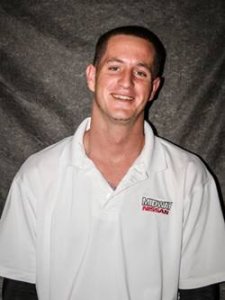 A sincere shout out to both stores for Owning the Phone. It doesn't matter your size, location, or franchise, anyone can dedicate their energy to getting better on the phone. I don't care what call tracking provider, CRM, website, or 3rd party lead providers you use. Own the Phone and great things happen.
Last edited: Jun 16, 2014