So, in only approx the last 3 months, I have experienced the following LARGE problems/lack of attention to detail:

A. I paid for a vehicle in cash, 16k. Received a paid in full receipt, and gate pass to remove the vehicle. Title was mailed to me a short time later, maybe about a week. Of course the gate pass would not have been issued, and the title would not have been mailed HAD THE VEHICLE NOT BEEN PAID IN FULL. There's no way around that with Manheim. So approx 2.5-3 weeks after paying for the car, I received a call from that location, get this: asking when I was going to pay for that car!!!! Flabbergasted, I said I already had, had picked it up, and received title already - two things which would have NEVER happened if the car hadn't been paid for!! I was told they'd do some research and get back to me shortly. Irritating but I wasn't worried. A few hours later they're calling back. I am told "Sorry, we have NO record of your payment, and DO NOT BELIEVE this car has been paid for. Pay the original balance plus late fees immediately, or bring the car back to us! It's clearly an error that a gate pass was issued and title was mailed." WOW ARE YOU KIDDING ME?? So pay twice for the same car, or give it back and let them keep 16k? Get the F out of here!!! I found my "paid cash" receipt for that VIN, marched it into a location, and got that cleared right up - though I never received an apology or even an excuse as to what may have happened on their end with regard to the error/oversight. What a great (lousy!!!!) computer system they have.....

B. One car I purchased, while I made sure to review the vehicle summary page - where it shows sale date, VIN, miles, the seller, CR score, link to Autocheck and Carfax reports, etc, then the "SALVAGE-YES OR NO" line, being clearly notated as *NO*, then after purchase receiving a Salvage Title instead of a Clear Title!!! Titles are non-negotiable in all 50 states, meaning if it's sold as Clear it has to actually and truly be clear. So after THAT phone call & subsequent research, found out the vehicle had a 'notation' as salvage/prior theft recovery in the Separate-window-opening "Seller Comments" button/section at the very bottom of vehicle summary page (which nobody clicks on).... Yet I was flatly told I should have clicked on & read those comments too -- doesn't matter one bit that the MAIN summary page showed "SALVAGE-NO", so it's *MY* problem now. BTW: the car brought clean title money. That's a nice little trick to offload a salvage vehicle for clean title money, right?!

C. Bid on a vehicle online, on Simulcast. My bid was accepted, I was the high bidder, and couldn't bid anymore (against myself!). At least 5 full seconds passed. Right before the auction ended, the bid actually ROLLED BACK, to the company I was bidding against, and THEY "won" the auction -- for a lesser amount than my accepted/recorded bid!! No explanation could be offered when I raised hell to managers, GMs, and corporate. Needless to say I didn't get the car. Wow!

D. Attempted to sell a vehicle. Got the lane and run number. Watching the auction as I was out of town, my car miraculously DOESN'T EVEN RUN!! Wow!

I'm furious. And I'm not going to run it 40 cars afterward, as most buyers waiting for it would have already moved on, thinking it wasn't running. Missed that opportunity! Dealers bring cars to Manheim to RUN AND SELL -- correct??? How does that occur if those cars don't EVEN RUN?? Completely ridiculous!! The explanation? We had a big problem with that this week. Lots of cars were in different lanes for some reason, and never ran. Your car that should have been in Lane 2? Yeah it was in Lane 8 - not sure why and sorry! Let's try again next week... Lol.

In addition to those, I've had numerous other smaller problems - such as but not limited to: floor prices not being put in at all/or put in at the correct amount, condition report or lack of condition report requests being put in incorrectly (ie in reverse of what I want), additional fees being charged WHICH ARE INCORRECT and not accurate (so keep an eye on your invoices or you'll probably pay a bit extra), evening gate hours being changed randomly so when you show up to pick up a car you have to come back the next day instead, occasionally cars on their property being messed with, andddd the list goes on....!!!!

Do I really need to come in and HOLD ALL THE EMPLOYEES HANDS, making sure they do their job properly??? What a disgrace!!! It's mind blowing how much stuff they've got wrong for me (more than has been right, I can assure you of that!) and that's JUST ME - what about the other thousands of dealers nationwide??

But, when Manheim makes A KILLING charging Buy + Sale Fees on every car, Condition Report fees, Sale Day Wash Fees, an additional Internet Satisfaction Fee (for internet sales - BOTH to buyer & seller!!), PSI Fees, Cash Payment Fee, etc, and contracts out the auctioneers to minimize employees & overhead - plus plays favorites with large new car stores and high volume dealers, they simply don't care about customer service or ANYONE -- just the bottom line profit margin. Which is sad really!!! Shame on you Manheim!!

And now, Manheim wants to focus more on digital sales - so buyers can't even see & inspect the cars they're supposed to be spending money on??? HAHAHA WHAT A JOKE!!! NOPE, NEVER DOING THAT!!!

While I will say: to deal with them is basically a necessary evil as they're the largest auction nationwide, and most dealers don't have much of a choice - it would sureeeee be nice if they upped their customer service & attention to detail immensely!! I guess that's my dream for the future, similar to Martin Luther King Jr's dream I guess.... maybe one day....

Until then: I wonder what the next fee they will come up with will be?? Perhaps like the commercial, a "fee fee". Or possibly a fee to enter the premise on sale day/an entrance fee. Or maybe start charging to park in their lot to attend the sale? Only time will tell which way this goes....

Thanks for reading and be careful dealers!

Note: these experiences above have been at several Manheim locations across three states, not just one location in particular.
Reactions: Alexander Lau

Be glad they don't charge an annual membership fee like the salvage auctions do. Or that it's free to use their site for MMR and post sale prices. For now at least.
Reactions: Alexander Lau

I live across the street from https://publish.manheim.com/en/locations/us-locations/manheim-pittsburgh.html. I should start a business where I contract and purchase for small lots / small dealers. Would be too convenient. 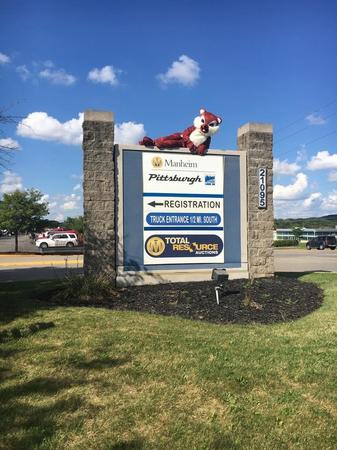