On the one hand, kudos to Sam Zales (Cargurus Pres & COO) and their executives for candor and what seemed to be a genuine public apology for screwing up. They could have easily put out a "corporate press release" and moved on, but instead they turned on the camera to let the world see and hear their message and respond to Q&A.

On the other hand, its pretty clear CarGurus (and their competition) is still hell bent on picking winners and losers as they leverage their scale and high-tech platform to expand their range of influence/control. What started out as an online automotive marketplace connecting buyers and sellers with a focus on transparency and trust appears to have evolved into controlling as many parts of the automotive retail dealer market as possible - selling, buying, inventory sourcing, financing, warranties, transport, you name it. This type of "behavior" is nothing new to retail in general. Just look at the consumer retail life-cycle from mom-and-pop merchants to shopping malls, to Walmart & Target superstores, to Amazon. Perhaps automotive retail is just finally playing catch up and what we are seeing is the natural evolution of the big players who will define and control larger pieces.

At the end of the webinar, we were left with an overall bad taste in our mouth - Cargurus (and others) are projecting a "take it or leave it" attitude toward the small-medium sized independent dealers (i.e. the very ones that make up the majority of their 35,000 paying customers). They can't answer the question - what specific things are you doing to serve and protect the small-medium sized, independent dealers that have funded your big success? Their best response is, once the beta testing with Carvana and Vroom is done and perfected, we will open everything up to allow all dealers to participate in instant offers, inventory sourcing, access to finance sources, virtual online showrooms, ship cars all over the country? Come on man. Get real. That is like using the dues of loyal members to build a lavish country club that only a handful of the richest (tech-savvy) members will be able to afford and have access to in the future. We think CarGurus should stay the hell out of the Inventory Sourcing arena. One of the best things about the auto industry is how fragmented and entrepreneurial it has remained, and that has been a good thing for car prices and buyers. According to IBISWorld, "the Used Car Dealers industry is highly fragmented, with non-employing dealerships representing more than 80% of the establishments in 2019." Do we really want a world where CarGurus and Carvana, Carmax, Autonation, Vroom, and a handful of other giants dictate car prices, supply, winners and losers etc?

CarGurus' success (3X their nearest competitor) came relatively fast because it built a "trusted and transparent marketplace" that focuses on serving the best interest of car buyers. Ironically they now seem to be on a path that would hurt car buyers the most - a marketplace dominated by fewer large sellers with no-haggle pricing and hand-picked vendors to handle all of the other moving parts. To hell with the small, independents? It will be interesting to see how many small dealers will continue their subscriptions in 2020.

Never forget this Golden Rule in the auto industry (perhaps its what guides CarGurus decisions when the cameras are turned off?):

It seems the best measurement of success for third party lead providers is how much the dealer body hates them.
Reactions: Steve Stauning, Jeff Kershner, Tallcool1 and 1 other person

Does anyone have a recording of this?
Reactions: Anthony Stanley

They said would make link available but havent seen it appear on the dealer portal yet. Will post here when available.
Reactions: Anthony Stanley
A

Retail My Ride said:
They said would make link available but havent seen it appear on the dealer portal yet. Will post here when available.
Click to expand...

Here is the link.

And here is the email it came with:

The biggest takeaway we'd like to emphasize is that we're listening to your concerns, and we will continue to act transparently and with integrity to be a trusted partner for your business. To reiterate:

As a company, we strive to provide a transparent experience for not just our consumers, but for our dealers, too. Our request is that you come to us directly, through your account manager or online channels, when you have questions or concerns - we'll always respond with honest feedback. Be transparent with us and we can keep improving the marketplace for you and your shoppers, to help you continue to grow your business. 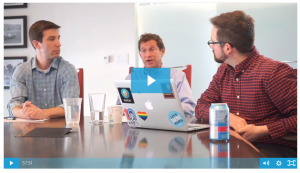 Reactions: Retail My Ride, Alex Snyder, Brittany and 1 other person

@Auto_NC - thanks for posting this.

Sounds a lot like how Zillow took/taking out the Real Estate Agents. There shear strength in Advertising made it huge for Agents to purchase leads. Now they are moving in on being a national brokerage to remove the agents from the process. Agents still buy leads and fund Zillows growth, while they take them out the market. It was too late for MLS and Associations to remove them out of the ecosystem and now have to watch it play out.
Reactions: Retail My Ride and Steve Stauning

Geesh, it's not been a great couple weeks for CarGurus.....last night some dealers in my 20 group got hit with $10K+ charges on their credit cards.

Maybe they needed a temporary influx of cash to make up for the drop in their stock price? lol 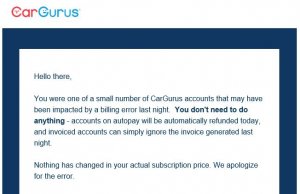 Couldn't have happened to a nicer group of folks. Attempt at sarcasm

reverson said:
Geesh, it's not been a great couple weeks for CarGurus.....last night some dealers in my 20 group got hit with $10K+ charges on their credit cards.

Maybe they needed a temporary influx of cash to make up for the drop in their stock price? lol