NickCybela said:
Another good best practice is to remove all Google Tag Manager (GTM) scripts from your site, including with web providers. Tags like the Criteo through SpinCar can be re-added or hidden otherwise, without any interaction from web provider or the dealership.

I also recommend dealers send a legally binding policy to all vendors around scripts/data/tracking. Pretty much any IP attorney can draft it with a couple hours work, and it'll keep the increasingly complex world of tracking data simple for those that can't afford a dedicated digital marketing expert in-house.
Click to expand...

Definitely, there can be many hidden conduits for leveraging (sucking) data off of a website and GTM can be used for just that. Your average dealer or dealer website group throws it up with no idea of what's truly being recorded or tracked.
Expand Signature
Automotive Digital Marketing Consultant
Just an Android Dreaming of Electric Cars

Jeffrey Tognetti said:
This post isn't solely about SpinCars. It is a common theme among select providers.
Click to expand...

Agreed. In fact, we are going to spend some time on this subject during this week's RefreshFriday. @Andy MacLeay will be joining us from Dealer.com to weigh-in on the matter too. I believe I was exposed to all the in's and out's of things like this during my time at Dealer.com/Cox. Never once did I even sniff any wrong-doing. However, the amount of script-install-requests was insane. With over 13,000 dealership websites on DDC technology one can only imagine. Andy is a good guest to discuss some more details here.

This isn't our primary reason for hosting Andy this Friday.


Jeffrey Tognetti said:
To which SpinCar continued with their radio silence, never replied and quickly withdrew their script placement request.
Click to expand...

Someone did reach out to @Jeff Kershner yesterday and we're hoping that is the start of SpinCar coming forward.
Reactions: DavidRozek and mikesayre

It has been brought to my attention that due to what has been posted here, there is a smear campaign in the works. Knowing this I figured I’d get out ahead of it.

What has been provided here is strictly factual with no agenda or personal attacks and because of these posts my character has been called in to question due to an unfortunate prosecution some 20 years ago, which to this day, I wear as a badge of honor.

Why? Because I’m not the only innocent person who has been convicted of crime with no evidence rather than going against my beliefs and pleading to a something I didn’t do.

But don’t take my word for it, if your so inclined, read what the Judge thought and how she ultimately resolved the case in the attached 24 page order. The Judge highlighted the lengths in which prosecutors will go to get a conviction, and how the jury themselves determined there was no loss and no intended loss.

With no intent was there even a crime? The Judge didn’t think so. Nor did the SEC which audited my Broker Dealer and found no wrong doing.

So what was the end result?
Because the Judge and the SEC found that there was no loss/no intended loss and the facts were so misrepresented in the case I was allowed to continue in the securities business, which is unheard of. That’s right, My Broker Dealer continued operations for years after the conviction, I didn’t spend a day in jail and ultimately paid a small fine.

Fortunately, the almost 20 years which passed have been good to me. I have had three more beautiful children, continued to enjoy lifelong friendships and live well. Transitioning my software initiatives from finance to automotive in 2003 was a seminal moment in my career, one that has led to countless client successes and a business continually delivering double digit millions per year in earnings. Proof it is possible to survive the curve balls life can throw at anyone. And as you can probably imagine I’m not the only one who has survived and then thrived in Automotive after having stumbled in the past; one needs to look no further than Carvana who has two such people at the helm whom went on with their lives and built a $8 Billion dollar company.

I have no regrets nor would I have changed anything which happened during that extraordinarily difficult period of time. That said, I can understand people wanting to know who they’re doing business with and in continuing to be the transparent person I’ve always been, I’ve posted the Judge’s order here:

Everyone loves an underdog and it’s a fascinating short read!

Jeffrey Tognetti said:
I have no regrets nor would I have changed anything which happened during that extraordinarily difficult period of time. That said, I can understand people wanting to know who they’re doing business with and in continuing to be the transparent person I’ve always been, I’ve posted the Judge’s order here:

Everyone loves an underdog and it’s a fascinating short read!
Click to expand...

Talk about hardened by fire! What a test of one's internal strength and courage. Business leaders always experience 'dark days', they are a fork in the road where you choose to be a victim or a victor. Todd Smith, Pres of ActivEngage gave me this coin below, I cherish the message and carry it with me everywhere. It speaks to looking at your darkest days with a mindset of a victor. 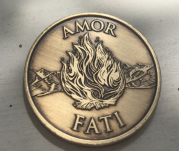 ​
Amor Fati is a Latin phrase translated as "love of fate" or "love of one's fate". 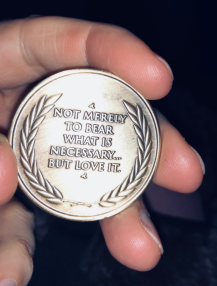 ​
"Not merely to bear what is necessary... but to love it"


"Run towards your fear. Your greatest lessons and personal growth await you"
-Uncle Joe
Expand Signature
Cars.com Head of Marketplace

"Deeply held opinions can lead you to wealth or to prison. Humbleness helps you see where you're headed."

joe.chura said:
We are currently looking at all instances where the Exelate tag is being fired from and finding the originating sources. There would never be anything placed directly via either Excelate or Nielson as we have never had a relationship with them. Therefore, it's the byproduct of another analytics script or 3rd party.
Click to expand...

We do not use Spin Car, we use Auto's on Video (AOV). Regarding shared data, many scripting codes are on our sites. I use Ghostery which is an add on your Crome Browser ext (its free).

Add it an it will show you who the AD trackers are on your website. Each AD tracker has a description as to who they are. I simply review the list with our account manager Kayley at Dealer Inspire and she explains to us what they do for us and what data they use and why. If it is something unusual DI will remove it from your site. See the SS below. Hope this helps. 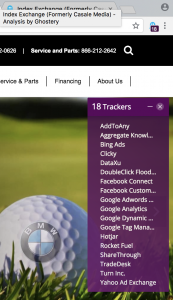 I think the real issue is what dealers don't know (or even their website providers don't know) about many of these trackers. Just because these companies don't redirect to Nielsen when you click the script doesn't mean they're not aggregating your visitor data and selling it your competition. Without a strong, written agreement on data usage with every company that has script on your site, you're just taking their word for it.

(Yes, even a written agreement isn't foolproof, though it can spell out strict enough penalties to keep these companies as honest as possible.)
Reactions: Alex Snyder

But but but... multi-touch attribution...
Expand Signature
"Recommended by 4 out of 5 people that recommend things."
Reactions: Jeff Kershner, Steve Stauning, Alexander Lau and 1 other person

OK, maybe dumb question, and if so I'll accept the deserved bashing.

Using Ghostery, BuiltWith, I find the Exelate tracking on sites, but can't find in HTML to rip out. Anyone know the syntax to search for?
Expand Signature
George Nenni
Principal Consultant
Generations Digital

Using Ghostery, BuiltWith, I find the Exelate tracking on sites, but can't find in HTML to rip out. Anyone know the syntax to search for?
Click to expand...

Are you looking to rip out a Spincar JS snippet or pixel? Keep in mind, it very well could be cloaked nicely.

Alexander Lau said:
BTW, I'd hold all of their partners and re-sellers responsible as well.
https://dealersuccess.net/spincar/
Click to expand...